Want better results?
Tell us your location to refine your search
to help us find listings near you?

In order for us to provide better results for you, you can specify your default location by providing it here.

COVID-19: For important and up-to-date information, please check the websites below:


ACT NSW NT
QLD SA TAS
VIC WA
My Community Diary
Event Completed
The event you have selected has been completed and is no longer available!
To Be Held At

Find out more about this location...
Visit this location on the My Community Directory website. Note, this opens in a new window.

“Miss Cummings, if we’re all different, doesn’t that kind of make us all the same?” -Juniper May, Robot Song

When eleven-year-old Juniper May receives a petition signed by her entire class stating that she is ‘the most hated person in the school’ her life is thrown into complete meltdown. After exhausting all other avenues her parents’ resort to the only thing they have left, a giant singing robot.

Based on a true story, Robot Song illustrates the profound, transformative nature of creativity that when combined with unconditional love, becomes an unstoppable force. For Juniper, creativity opens doors into places she never knew existed allowing her, for the first time, to be defined on her own terms.

Robot Song is a deeply personal story. It shares an honest, intensely funny and often unconventional window into writer, director Jolyon James’ experience parenting a child on the Autism Spectrum.“Gorgeously told and superbly crafted, a must-see for young people growing up in a world where bullying is widespread but who need to understand that difference should be seen as an asset.” 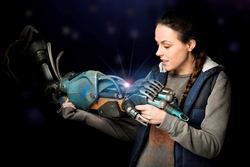