Want better results?
Tell us your location to refine your search
to help us find listings near you?

In order for us to provide better results for you, you can specify your default location by providing it here.

COVID-19: For important and up-to-date information, please check the websites below:


ACT NSW NT
QLD SA TAS
VIC WA
My Community Diary
Event Completed
The event you have selected has been completed and is no longer available!
To Be Held At

Find out more about this location...
Visit this location on the My Community Directory website. Note, this opens in a new window.

The Passion & Sadness of Flamenco

Arrebato Ensemble is Greg Alfonzetti, Damian de Boos-Smith and Byron Mark, three passionate musicians who write with all aspects of their heart, creating a mesmerising and highly dynamic journey for their audience. The group’s music is primarily contemporary flamenco, with elements of classical, jazz, film soundtrack and folk music.  Arrebato Ensemble has performed at the Sydney Opera House, regional festivals and at WOMADelaide.

“Nomatter how far Sydney flamenco guitarist Greg Alfonzetti moves from pure flamenco in favour of a contemporary style, the spirit, a dramatic, sexually charged and haughty sadness remains intact. Alfonzetti’s spitfire guitar is sensationally captured by composer Damian de Boos-Smith, who not only recorded the music but contributed to cello, guitar and mandolin… 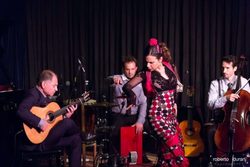